A Publication After Our Own Hearts Coming Soon - Women of Darkness

If you've followed anything we've done here at Hocus Focus Productions, I think you'll agree that most times when we see someone who shares our interests, we see them as a kindred spirit rather than competition.  I usually hope that they feel the same way.  "Women of Darkness" is going to be one of those publications that we hope we can help out and vice-verse. 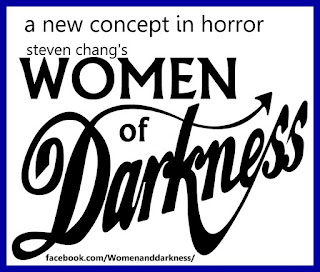 I found out about W.O.D. from the magazine's Marketing Director, Amy Crabtree.  She writes:

Women Of Darkness was created by Steven Chang! I (Amy Crabtree) am the Marketing director. We are not in print form yet, but will be soon next year. We work with many prominent actresses and models in the Independent horror film scene. Included are: Jenn Nangle, Lara Jean Mummert, Brialynn Kim-Massie, Johanna Rae, Mel Heflin,Layla Dideban, Liane Langford, Genoveva Rossi, Morrigan Thompson,Nikki Siebi,The band Iejir, Ashley Mary Nunes and so many more!

The W.O.D. Facebook page reads: We offer free promotional spotlights for many people ranging from actresses, models (including alt/gothic, pinups, horror models) to writers, filmmakers etc. We also are now promoting musicians (bands) and horror events as well.
Sure we mostly deal with women. But we can make exceptions for men as well. Want information regarding a spotlight or promotion, feel free to send us a PM. If you want a spotlight or promotion, feel free to contact us as well. Same for if you would like to join the page. Serious inquiries only though.

To help with branding and to keep people's attention, the magazine also has a spokes model.  Allow me to introduce you to "the face" of "Women of Darkness", Morrigan Thompson.