Volume 3, Roxsy Tyler, the new layout and things to come

Hello, gang!  It's been awhile.

I've said it before and I'll say it again, running a nearly one-man show with our little magazine means that health and life issues can often cause delays.  This year we've experienced those both here at the CGM offices and with some of our planned goddesses.  Couple that with my strong desire to change the format a bit and you have this: Our first interview of Volume 3 hitting in October, instead of months earlier.

The major change we'll be making is posting interviews, articles and comic pages right here in the blog space for easier internet navigation.  We'll still bring you great pictorials and interviews with fabulous ladies, but now you won't need Adobe Acrobat to read them.

This will also allow us to post singular episodes of the web series, "Cult Goddess Magazine - TV", going into season 2 right now, here in the same space!  Hang on tight for that.

For those of you who love the old magazine layout format, fear not, it will return.  As the blogspace grows we'll be integrating the interviews into one major volume issue with a full layout and then that, as always, will be made available for download or on DVD-R so  you can get your favorite goddess to sign it.

Now, without further ado, here is our first new interview since 2010, Horror Hostess and all around cool lady:
Roxsy Tyler (photos by J. Isobel De Lisle at jisobeldelisle.com) 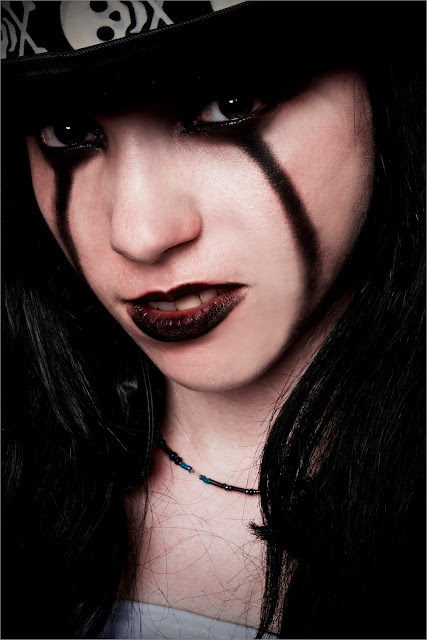 CGM: Tell us about Carmela Hayslett and her relationship with the “terror in a top hat”.

RT: Well if Roxsy Tyler wasn't me I would say we wouldn't get along very well. I'm very much a quiet person, very polite, very afraid of a lot of things. Roxsy Tyler is the complete opposite! She's loud, obnoxious, and she absolutely has to be the boss of everything. I could see Roxsy Tyler getting in a bar fight but little ol' me? I would be hiding in a corner. That's the scary thing about Roxsy Tyler. The more you get to know her the more you realize she's a wild card. She can't be controlled. She'll jump into anything without fear of consequence. However, I enjoy the night and day personality. Roxsy Tyler was originally a character in my book "Big Boots and Black Hair Dye". I would daydream of this woman who has long black hair, wears a top hat, dresses like a comic book villain who's personality is all over the place. She was my muse for many things though I was never sure how I dreamed her up in the first place. The transition from thought to story and then from story to an actual personality was incredible. The more Roxsy Tyler is let out of the box the better she becomes. You never know. If you took away all rules and expectations you might find yourself a different person too. I just gave mine a name and a top hat.

CGM:  How was Roxsy Tyler first introduced to TV and internet Audiences?

RT: I made my onscreen debut on Midnite Mausoleum when I helped host "Carnival of Souls" with Marlena Midnite and Robyn Graves. I didn't ever intend to do my own show. Doing Midnite Mausoleum was a fun excuse to fly out and meet Blake Powell (co-creator of Midnite Mausoleum) in person after having been friends with him online for so many years. A few months after I came home it appeared that a lot of people wanted me to do my own show too. I had the resources to do it and there's so many horror hosts out there... why not one more? It was never part of the plan but I'm glad I took a shot at it especially since I would like to pursue having an acting career.

RT: Laughing keeps me alive. I always said my goal in life before the day I die is to laugh as much as possible. The Marx Brothers make me laugh because their personalities are so chaotic. I want to entertain people the way I'm entertained. The sarcasm, the fast deliveries, the intentional obnoxiousness of their characters are comedy gold. It has little to do with horror but we really wanted to incorporate a Marx Brothers appeal into our show to give it that something extra. We strive to be as lovably chaotic as they were. 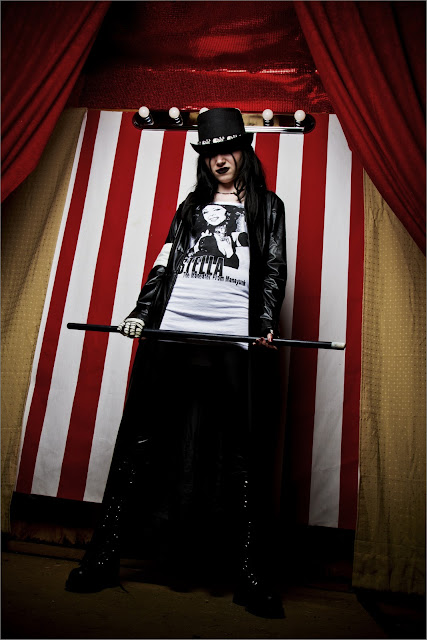 CGM: You and Johnnie 13 don’t always seem to get along. What’s with the on air fighting?

RT: Let's get one thing straight, okay? I'm the boss lady at my Carnival of Horrors. Johnnie 13 is my right-hand man. When he gets lazy on me I have to give him a hard time or people will notice that I'm just as lazy as he is! I can't have him making me look bad! Johnnie 13, if you're reading this... get back to work!

CGM:. Your first ever Halloween special was shot on location at a hayride. Tell us about the connection to The Valley of Fear in Fearsville, PA.

RT: The Valley of Fear is a Haunted Attraction made up of a haunted hayride, two haunted houses, and a haunted walk through the woods. It's been my favorite Halloween haunt since


I was a little girl. As I grew up I became better acquainted with the people who work there. Johnnie 13 has been working there for seven seasons now. Everyone on my show except Mr. Potent and I works at the Valley of Fear. It was cool to do our 2010 Halloween special there because the place always had such a special place in my heart since I was a little girl and then to suddenly return to do my show there was a really great experience.

CGM:  What jobs do you do behind the scenes on the show? 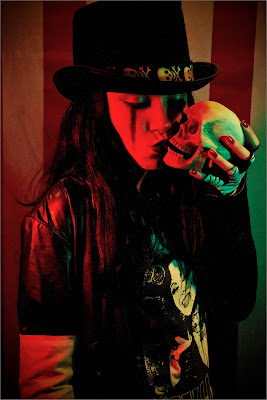 RT: Behind the scenes I direct the show, co-produce the show, do the principal writing for the show, and I edit the show. The boys handle everything else. Mr. Potent (Christian Jude Grillo) does all the sound supervision, the camera work, and he produces all the music heard on our show completely in-house.

CGM:. Your alter ego, Carmela Hayslett, has a new film, which will probably be in post production when this interview hits. Tell us a bit about it.

RT: We just wrapped on Deer Crossing on September 25th and we're all very excited to see the film come out next year. Deer Crossing is a twisted crime drama about a retired cop, Derrick Stanswood (played by Christopher Mann from HBO's The Wire) who is called in to re-open a cold case about the disappearance of a woman and child. As Detective Stanswood is chasing loose ends in the backwards rural town in Pennsylvania the woman and child have actually been held captive for last eight years by a maniacal farmer (K.J. Linhein). It's a really disturbing film where the director is intending to test the comfort levels of his audience. Most of the people who signed on to be in this film had to think twice about it as they found the script terrifying. Casting agencies didn't want to cast for it and we caught a lot of heat for the film's teaser. Heat was what we wanted though. If we release this film in theaters and someone gets up and walks out from being so disturbed by it than that's a bigger compliment than a pat on the back. I play Olivia Brice, a special interrogator who is introduced through the third and final act of the film. The coolest part was that I had about three or four scenes with Ernie Hudson (Ghostbusters, The Crow) who plays the police captain. The film also stars Doug Bradley who is beloved as Pinhead from the Hellraiser series. He plays the sheriff of the corrupted town. It's going to be a kick-ass film... kind of live Deliverance meets the Devil's Rejects. 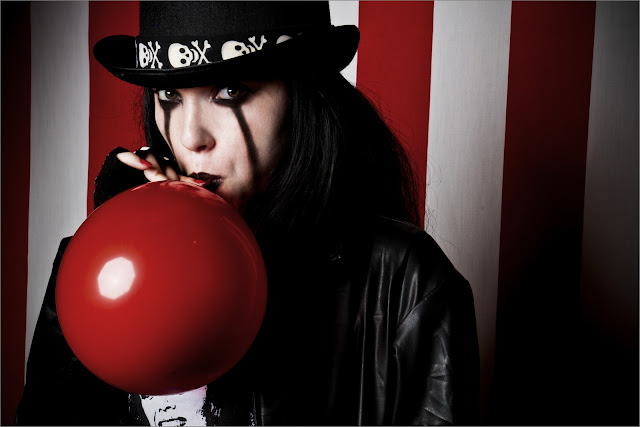 CGM:  Is anyone else from “Carnival of Horrors” involved with the film?

RT: Everyone in Carnival of Horrors is involved in Deer Crossing. Mr. Potent (Christian Jude Grillo) wrote and directed the film. Johnnie 13 helped out on cameras, Chuck Maher who plays Dr. Villhelm on my show, he was Mr. Potent's assistant and he even had a cameo in the film as the owner of a junkyard. Even cast members from our past episodes were involved from Christopher Walter who played Charlene to D. M. Folger who played himself on my show, to Tom Detrik who used to be Bobo the Clown... they can all be seen in Deer Crossing. We're produced by Potent Media so whenever there's a project we all dive into it together. Deer Crossing production-wise is what Carnival of Horrors would be shot like if we weren't a no budget production.

CGM:  You’ve sported different T-shirts on your shows (we’ll be sending you a couple soon). Tell us about how that started , why you do it and what some of your favorites are.

RT: I'm not a fan of wearing tight and constricting clothing too often so I wanted to wear t-shirts on my show. There's so many underground productions and other horror hosts I support that I decided to start wearing their t-shirts on my show. It's a fine way to show them some love and promote them at the same time. My long time favorite shirt to wear on the show is my black and red Monster Madhouse t-shirt. Just recently I've been sporting my white Stella Maneater from Manayunk t-shirt to show some love to the horror diva who came before me!

CGM:  How do you relieve stress?

CGM:  Where can readers see your show, learn more about Roxsy Tyler and keep up with your growing career?

RT: To see full episodes of Roxsy Tyler's Carnival of Horrors you can go to http://vimeo.com/carnivalofhorror  we also have some videos up on youtube at username RTCarnivalofhorrors. We stream past episodes on livestream at http://livestream.com/carnivalofhorrors and I welcome anyone to find me on facebook either friend me or like the show page because we update the most often via facebook. 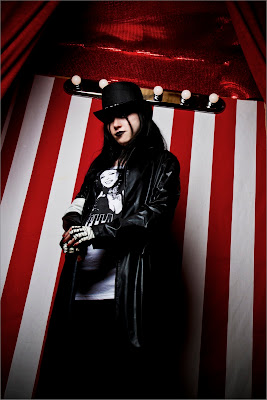 
I highly suggest, with Halloween approaching, that you all take advantage of those full episodes online to help get you in the mood.  Also, I'd like to thank  J. Isobel De Lisle at jisobeldelisle.com for some fabulous photos!  Amazing work that we're proud to have.
Click  the link to the continuation of the "Lunar Pack" comic excerpts right here and new episodes of CGM-TV.  Meanwhile check out http://www.cultgoddessmagazine.com/ for more.

Meanwhile, enjoy some video from Roxsy Tyler's Carnival of Horrors